How to pronounce Italian food 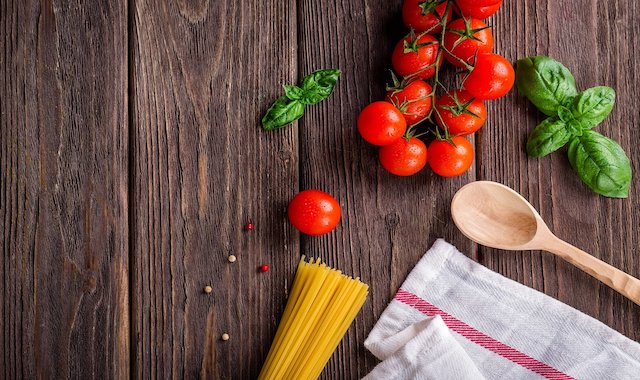 Pizza quattro stagioni - literally meaning "four seasons". It has the same ingredients as the capricciosa but they are placed in four different sections, each representing one of the four seasons.

Bruschetta - the classic grilled bread that is rubbed with garlic and served with fresh tomatoes and olive oil.

Caprese - a fresh salad made with tomatoes, mozzarella, basil and olive oil.

Focaccia - flat oven baked bread that is similar to the texture of pizza.

Burrata - creamy cow milk cheese made from mozzarella and cream.

Mascarpone - a type of cheese that is often used in desserts, such as tiramisù or cheesecakes.

Parmigiano reggiano - parmesan in Italian. This is one of the two types of parmesan, the other is Grana padano.

Ricotta - whey cheese that can be made from cow, sheep, got or buffalo milk.

Stracciatella - soft cheese made from buffalo milk and cream. It is very similar to the inside of the burrata.

Taleggio - semi-soft cheese with a strong aroma but mild taste made from cow's milk.

Capocollo - often known as gabagool in the US. It is a pork's neck cold cut.

Mortadella - large pork sausage and luncheon meat that is often called Bologna outside of Italy.

Al dente - when pasta is served firm to the bite, it is cooked al dente.

Bucatini - like spaghetti but thicker and with a hole through the middle.

Cannelloni - cylindrical type of lasagna served with a filling and sauce on top.

Fettuccine - thick flat noodles made of egg and flower.

Lasagna - thin layers of pasta with fillings that include mozzarella, ragù and tomato sauce.

Linguine - a form of flat spaghetti.

Orecchiette - literally means small ears, which is also what they are shaped like.

Ravioli - filled pasta that can have a number of different fillings.

Amatriciana - sauce made with guanciale, pecorino and tomato sauce.

Bolognese - technically called ragù in Italy. It is made with tomato sauce and minced meat.

Carbonara - sauce that is traditionally made with egg yolks, pecorino and guanciale.

Panini - literally "sandwiches" in Italian. Panino is the singular form of panini.

Piadina - thin Italian flatbread made with a variety of cold cuts and cheeses.

Risotto - creamy rice dish that is cooked with broth and can be made with numerous other ingredients. It is the primary way rice is cooked in Italy.

Minestrone - thick soup made with vegetables and sometimes with rice or pasta as well.

Braciole - thin slices of meat rolled with cheese and breadcrumbs and fried. Braciole are also a type of meat cut.

Zabaglione - a kind of light custard.