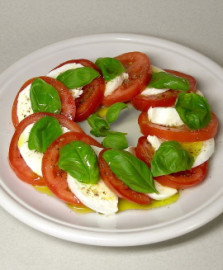 The Caprese salad or Insalata Caprese is an Italian salad made with slices of tomato, mozzarella cheese, basel, olive oil, salt and pepper. Caprese salad is often misconceived as a side dish, but in Italian culture it is considered as either an appetizer or an entrée, especially during Summer. The dish is originally from the island of Capri, from which it derives its name that directly translates to "from Capri".
A common mistake in British and American culture is that chicken, prosciutto or leafy greens such as lettuce are added to the dish. This would be considered as heresy in Italy. Caprese can be served as a caprese sandwich only when the exact ingredients of the salad are used, with no additions.
English speakers often mispronounce the word caprese ​by pronouncing it as Cah-prey-zee.
However, the correct pronunciation of Caprese is Cah-preh-zeh.
The way to pronounce caprese in Italian is to focus on the vowels, which are all pronounced as short vowels. The "a" in the first syllable is pronounced with an "ah" sound that is produced by opening your mouth vertically, more so than you would do in English. The "e" in the second syllable is not pronounced with an "ey" sound, but with an "eh" sound that is slightly more closed than how you would pronounce it English. The final "e" is once again pronounced with the same "eh" sound and not with a long "e", or "ee" sound.