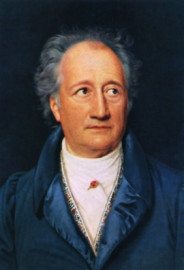 Johann Wolfgang von Goethe was a German writer, poet, playwright, painter, statesman and also wrote numerous scientific treatises. Among his most noted works are The Sorrows of Young Werther, which is often considered the world's first bestseller and the epic, Faust.
The correct pronunciation of Johann Wolfgang von Goethe in German can be phonetically approximated as Yo-han Volf-gang Fohn Guh-teh.
The reason this is only an approximation is because the "oe" sound in English does not have a correspondent in this case, without the use of IPA. Here we have approximated it with the placeholder -guh, but it is imprecise. A better example of the sound to reproduce when saying Goethe would be the "ea" sound at the beginning of the word "early". If you take the "ea" sound and add -teh you can reach a good pronunciation of Goethe. It is important not to add the "r" as well, even if many transcriptions are written as ger-te. The reason it is transcribed this way is that it helps English speakers pronounce the "oe" sound in Goethe the right way. Another mistake to avoid is pronounce the end with a "tay" sound. Instead, the -the in Goethe has a similar sound to the "te" in the word "tell".