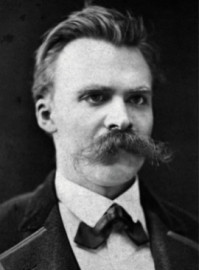 German philosopher, philologist, poet, cultural critic, composer and often wrote through the use of aphorisms. Some of the most noted texts he wrote are Thus Spoke Zarathustra, Beyond Good and Evil and Ecce Homo: How One Becomes What One Is.
To aid pronunciation for English-speakers, the phonetic transcription of his name can be written as Free-dreek Veel-helm Knee-chuh. Whilst the phonetic transliteration for Friedrich and Wilhelm are quite straightforward to pronounce, Nietzsche is more complicated. The "uh" sound at the end of Knee-chuh actually sounds midway between an "ah" and "eh". An example of this sound in the English language can be found at the beginning of the word "apart". If you pronounce the "a" at the beginning of apart, on its own, that is very close to the sound of the "e" at the end of Nietzsche.