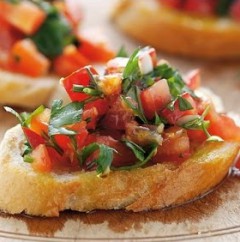 Bruschetta is an Italian dish prepared with a roasted slice of bread, garlic, extra virgin olive oil and salt as the base of it. A bruschetta is then enriched with a number of other ingredients, which traditionally can include tomatoes or Mozzarella cheese, or meat products from pork.
The bruschetta is usually treated as an appetizer in Italian cuisine or a snack, and there are different variation of the dish in different regions of Italy. The dish developed as a way to consume bread that was going stale in order not to waste food.
Bruschetta is the singular form of the word, thus a single piece of bread is identified as a bruschetta. The plural form is bruschette.
The word bruschetta derives from Roman dialect, where bruscare is the verb, "to toast or roast".
English speakers often mispronounce bruschetta because they pronounce the "sch" sound as "sh", as is typical of the English language. In Italian the "ch" always produces a "k" sound. Therefore, the correct pronunciation of bruschetta in Italian is broo-skett-ah. It is important to stress the double "t" and lengthen its sound more than you would with a single "t". Also, the "e" in -skett is technically a very closed "e" in proper Italian diction, as you will hear in the audio pronunciation, although in different dialects in Italy it is pronounced with varying degrees of openness.