An expensive watch is a status symbol. When you buy one, it means that you have become successful, rich, and can afford to purchase costly objects.
The most expensive and luxurious watches are produced in Switzerland, Italy, France, and Germany. Their names, therefore, are difficult to pronounce and, very often, English-speaking people mispronounce them.
If you are looking for accuracy in reading the time, be accurate in pronouncing these names. 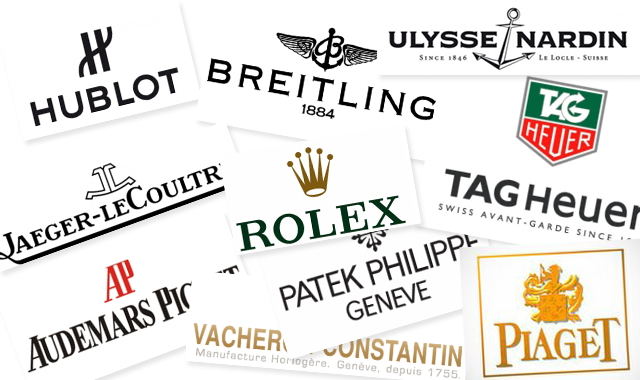 Rolex watches are unquestionably the most renowned in the world. The Swiss company was founded by a German watchmaker and his British brother-in-law in England, in 1905. The firm moved permanently to Switzerland in 1919.
Rolex was a real innovator company in watchmaking: they were the first to create a water-resistant wristwatch, to offer an automatic system to change the date on the dial, and to earn chronometer certification for a wristwatch.
Dustin Hoffman, Daniel Craig, but also Eric Clapton and Plácido Domingo own a Rolex. Even Che Guevara, the Argentine Marxist revolutionay, wore a pricey Rolex on his wrist.
Click Rolex and listen to the correct pronunciation of the word.

Jaeger-LeCoultre is a Swiss luxury watch company founded by Antoine LeCoultre in 1833. Edmond Jaeger, a watchmaker based in Paris, joined the company in 1903 and brought with him some of his inventions such as the ultra-thin movements. The American actors Clive Owen and Robert Downey Jr were spotted wearing a Jaeger-LeCoultre.
Click Jaeger-LeCoultre and listen to the audio pronunciation.

Ulysse Nardin is a company founded by the Swiss watchmaker Ulysse Nardin in Switzerland in 1846. The firm is famous worldwide for producing extremely accurate marine chronometers. The company is also involved in developing new technologies through The Ulysse Nardin Watch Academy, which grant scholarships to those watchmakers who find new ways to enhance the performance of watches. Larry King owns a Ulysse Nardin wristwatch.
Click Ulysse Nardin and listen to the audio pronunciation.

TAG Heuer is a Swiss company founded by Edouard Heuer, in 1860. The company was later sold to French luxury goods corporation Louis Vuitton Moët Hennessy (LVMH). The perfect match: a Tag Heuer watch and a Louis Vuitton bag. Leonardo DiCaprio owns for sure more than one TAG Heuer wristwatch.
Click TAG Heuer and listen to the correct pronunciation of the brand.

Piaget is a Swiss company producing luxury watches that are as precious as real pieces of jewellery. The firm was founded in 1874 by Georges Piaget and started its business selling only watch movements. Afterwards, the company started producing a new line of watches. Piaget is renowned as the creator of the thinnest automatic movements in the world. The American actors Anne Hathaway, Alec Baldwin, Aaron Eckhart have been seen wearing a Piaget watch.
Click Piaget and learn the correct pronunciation.

Breitling is a Swiss company founded by Léon Breitling, a young Swiss watchmaker, in 1884. He specialized in chronographs, and soon he began producing regular chronographs and aeroplane chronometers. The first Breitling wristwatch was created in 1942, and it became immediately a hit among pilots. The brand is pronounced in English, but we don’t guarantee that Mister Léon Breitling would pronounce his name in the same way. David Beckham, Brad Pitt, Bruce Willis, Russell Crowe, Gordon Ramsay all wear a Breitling watch.
Click Breitling and listen to the correct audio pronunciation.

Vacheron Constantin is one of the oldest watch companies in the world, and it was also the first firm to start exporting watches to France and Italy. It was founded by Jean-Marc Vacheron, a Swiss watchmaker, in 1755. In 1819 François Constantin joined the company and took care of the commercial side. Vacheron Constantin created in 1979 one of the most expensive wristwatches in history: the watch was called Kallista, and the price was $5 million.

Patek Philippe was founded by Polish Antoni Patek and French Adrien Philippe, both skilled watchmakers, in 1851. Their watches have always been most appreciated by royals. Among their crowned customers, we found Queen Victoria and Prince Albert, the king and queen of Denmark, and  Victor Emmanuel III of Italy.
Click Patek Philippe and learn hot to pronounce this brand.

Festina is a Spanish watch brand founded in 1902 in Switzerland, but the company headquarters is located in Barcelona. The charming actor Gerard Butler is the testimonial of Festina luxury watches.
Click Festina and listen to the audio pronunciation of the word.

Hublot is a Swiss company founded by Italian Carlo Crocco in 1980. He grew up in a family of watchmakers, and he created a very elegant sporting wristwatch with a bracelet made from natural rubber. The watch became immediately very fashionable worldwide.
Click Hublot and listen to the correct pronunciation of the brand.