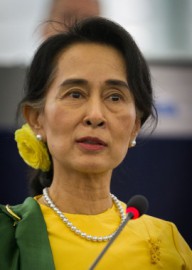 Burmese politician. Aung San Suu Kyi is a human rights activist in her country, the Republic of the Union of Myanmar, once known as Burma. Myanmar has been oppressed by a harsh military dictatorship, after a coup d'état in 1962.
Aung San Suu Kyi is the Chairwoman of the National League for Democracy, the political party she founded in 1988, in order to fight for freedom and democracy in Burma.
Aung San Suu Kyi was under house arrest for many years, sentence that had the only purpose to block her political action. In 1990, the National League for Democracy, guided by her, won regular elections, but the regime cancelled the results and sentenced her to house arrest, in order to prevent her becoming Prime Minister of Myanmar.
Aung San Suu Kyi won the Nobel Peace Prize in 1991.