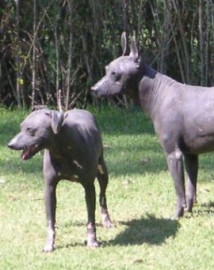 The Xoloitzcuintli, also known, for simplicity's sake, by the name of Xolo is a Mexican dog that is hairless. The Xoloitzcuintli is considered as a symbol of Mexico and was proclaimed as a symbol of Mexico City in 2016.
This breed of dog is known to be very old and were domesticated by the indigenous peoples of Mexico, such as the Aztecs, the Maya and the Toltecs. In fact, the Xoloitzcuintli, also known as Colima dogs, were considered sacred and seen as guardians and protectors.
Though this breed is often known as Xoloitzcuintli, this is the Nahuatl (Aztec) name. The name commonly used in modern Spanish, in Mexico, is Xoloitzcuintle.
The name Xoloitzcuintli originates from the god Xolotl and itzcuīntli, which means "dog" in Nahuatl.
The correct pronunciation of Xoloitzcuintli in Spanish can be approximated as shoh-loh-eats-QUEENT-ly. You will often find this pronunciation with the first part transcribed as "show-low". This is slightly misleading because these two "o"s are more open in nature, creating more of an "oh" sound. In addition, the third syllable, "eats" is pronounced in a slightly more compressed or more quick manner.