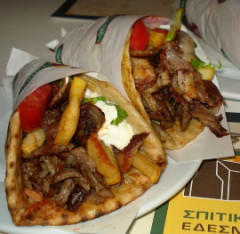 Gyros or gyro is a Greek dish that is made with meat of various types cooked on a vertical rotisserie, which is usually wrapped in a pita with lettuce, onions, tomatoes, French fries and tzatziki sauce.
The question of how to pronounce gyro in Greek is a controversial topic in English speaking countries. The correct Greek pronunciation of gyro is Yee-Roh and not J’Eye-Row as is often heard in the US. This wrong pronunciation arose because the abbreviation of gyroscope, also gyro, is pronounced J’Eye-Row.
This dish gained popularity in the US in the 1970s in Chicago and New York, and later garnered worldwide attention, similarly to its culinary ancestors, the Döner Kebab, from Turkey and the Shawarma, from the Middle East.
When it was popularized in the US, people assumed that gyros was the plural form because of the “S” at the end, which in English usually indicates the plural form. Even dictionaries have incorporated the anglicized modification, such as in the Merriam-Webster dictionary entry, which indicates gyro as singular and gyros as plural.
However, in Greek, gyros is the singular form. As you can hear in the audio file, gyros is pronounced Yee-Rohs.
Whether you would use gyros or gyro depends on its declension, which means its syntactic usage in a sentence. Greek has different declensions based on the form of the word. As you will see, this also influences the plural form. In this case, the noun gyros has different declensions based on whether it is in the nominative or the accusative form.
When gyros is in its nominative form, so when it’s the subject of a sentence, you would say “This gyros is amazing!”. In this case, the plural becomes gyri. So, you would say, “These gyri are excellent!”, pronouncing gyri as Yee-Ree. But in the accusative form, so when it is the object of a sentence, you would say, “May I have a gyro?”. In this case, the plural becomes gyrous. So, you would order multiple gyrous by saying, “May I have two gyrous?”, pronouncing gyrous as Yee-Rous.