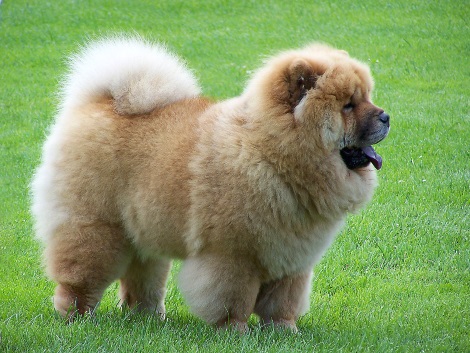 What kind of dog is a chow chow

We all know that chow chow is a breed of dogs from China. The breed originated during the Han dynasty (206 BC - AD 220), and it looks like is one of the oldest breeds, very close to the wolf.
Chow chows are robustly built dogs with a large head and a thick coat, especially around the neck, and have a blue-black tongue.
They are quiet and well-behaved dogs, even if some insurance companies consider them high-risk dogs.

Why are they called chow chow?

The original Chinese name of these dogs is songshi quan, while chow chow, as we know it, is the result of a simple misunderstanding.
When the first dogs of this breed were shipped from China to England in the 18th century, they arrived in crates marked chow chow, as most of the merchandise coming from China. These words were written in Chinese pidgin English and their real meaning was: miscellaneous merchandise.
Once the ship was unloaded, everybody simply assumed that chow chow was the name of these beautiful dogs.
Chow Chow is pronounced chou-chou.
Listen to the correct audio pronunciation of Chow Chow