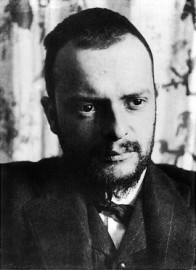 Paul Klee was a Swiss-born painter of German nationality. This is because under Swiss law at the time Klee inherited his father's German nationality. As an artist, Paul Klee was very prolific, with more than 10,000 paintings and drawings to his name. His unique style is impossible to classify because it contained a number of different influences and he uses various different styles through his own interpretation of them. He was also a master of art theory, giving extensive lectures at the Bauhaus school in Germany and published a collection of them called Writings on Form and Design Theory, which were published in English as the Paul Klee Notebooks, that are held to be fundamental for the theory of modern art.
The correct pronunciation of Paul Klee in German can be phonetically transcribed as Pah-ool Kleh. However, the pronunciation of Klee cannot be adequately transcribed without IPA. This applies to the "e" sounds in Klee, which are tight, closed sounds that don't exist in the English language. Furthermore, that "e" sound must be sustained for a longer duration. His first name, Paul, is pronounced in a similar way to the sound "pow", but with an "a" placed prior to the "ow".