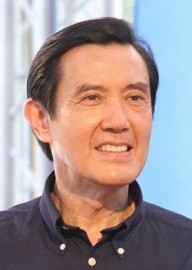 Taiwanese lawyer and politician, born in Hong Kong. He is the current President of the Republic of China, a country best known as Taiwan, where the official language is Chinese.

Taiwan was once called Formosa, from Portuguese ilha formosa, which means beautiful island.

Ma Ying-jeou was elected to a second term in 2012: he is the 12th and 13th President of the Republic of China