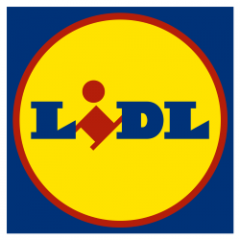 Lidl is a global discount supermarket chain from Germany. Lidl was founded in 1930 by Josef Schwartz but started achieving strong global expansion under his son's guidance Dieter Schwartz, when the store began focussing on the discount and cash and carry supermarket model. Today, Lidl has more than 10,000 stores in the world.
The name Lidl derives from founder Josef Schwartz's former business partner whose surname was Lidl. However, the name Lidl was initially not used for Dieter Schwartz's discount markets as he did not have the legal rights to them. However, he circumvented the issue by buying the legal rights to the Lidl surname by buying them from a painter and former schoolteacher, Ludwig Lidl.
Lidl's main competitor is fellow German discount chain, Aldi.
The correct pronunciation of Lidl is Lee-dul.
The "i" in Lidl is pronounced as a long "e", which means it is pronounced with an "ee" sound and not with a short "i" as it is often pronounced by English speakers. The "dl" in Lidl is pronounced as if there were a short "u" between the "d" and the "l" that is barely pronounced.