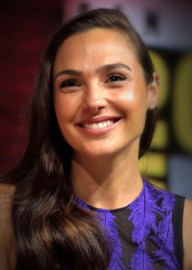 Gal Gadot is an Israeli actress and model who is one of the highest-paid actors in the world. She began her career as a model, when she won Miss Israel at the age of 18. She subsequently served in the Israeli military for two years.
Gal Gadot began her international movie career with the film Fast & Furious, but gained international recognition when she starred as Wonder Woman in Batman v Superman: Dawn of Justice, Wonder Woman and Justice League.
The correct pronunciation of Gal Gadot is Gal Gah-doht. Sometimes Gadot is mispronounced because, upon seeing the end of her name, -dot, people assume that it is pronounced with a silent "t" like in French. However, Gal Gadot is from Israel and her name is Hebrew, so the "t" in Gadot is pronounced.