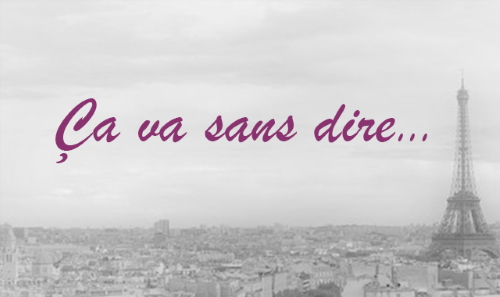 Tête-à-tête, vis-à-vis, noblesse oblige, rien ne va plus, ça va sans dire... These are some of the most popular French idioms used all over the world. Let’s see what do they exactly mean and how to pronounce them. Click the blue words and listen to their correct pronunciation.

The French expression Ça va sans dire can be translated into it goes without saying, meaning that something, a concept or a thought, are so obvious and clear, that they do not need to be explained or even stated.

This French exclamation (literally in English, that’s life) is used when something unpleasant happens in your life, and you can't do anything about it. Well, you have to accept it because... that's life! C'est la vie!

The French idiom Comme ci comme ça (literally, like this like that), means that something is not good nor bad, it is just average, mediocre.

If you translate Crème de la crème literally into English, you would say is cream of the cream, meaning that something or someone is the very best available, the best of the best.

The expression En plein air can be literally translated into in the open air. This French expression has the same meaning as an English idiom borrowed from Italian: Al fresco. It means outdoors, on the outside.
En plein air is also the act of painting outside. The most famous En plein air artists were Édouard Manet, Claude Monet, Paul Cézanne, Pierre-Auguste Renoir, and Vincent van Gogh.

An Enfant prodige is literally a child prodigy, a child particularly gifted and talented under the age of ten. The most famous Enfant prodige worldly recognized is Wolfgang Amadeus Mozart, who started composing at the age of five.

This French expression, Enfant terrible (literally translated into English is terrible child), refers to an unruly child who, in a very candid way, says terrible things embarrassing parents and bystanders. However, this expression can also be used referring to adults who are considered genius, usually in artistic fields, and can create unique and unorthodox masterpieces, usually offensive.

This idiom was created by French philosopher and writer Denis Diderot to indicate the situation when someone makes a rather unpleasant remark to you, and you do not have a quick reply: when the right replay comes to your mind, it is too late… it comes to you when you are on a ladder. Esprit de l'escalier literally translated is staircase wit.

The French expression Femme fatale (literally, fatal woman) indicates a siren, a woman incredibly attractive who can be a real danger to a man.

Les jeux sont faits (the bets are made) is a sentence used by croupiers in the roulette games. Outside casinos, this French expression means that it is not possible to change things, time is over.

The French idiom Noblesse oblige can be literally translated into nobility obliges. It is used to express the concept that: being noble and rich requires some responsibility towards the less fortunate. High rank people, since they are so privileged, should be good role models for less lucky folks.

Pourparler is a French expression used to indicate a diplomatic consultation, a preliminary talk before an important decision. It is commonly used with the meaning of talking about, discussing.

Rien ne va plus (literally, nothing goes any more), such as Les jeux sont faits, is a French expression used in the roulette games. The croupier says Rien ne va plus when the time to bet is over.

Tout court (literally, all short) is a French idiom indicating a very short concept, explained without any futile addition, kept it very simple.

In English, Vis-à-vis means face-to-face, but in French, it can also be used to indicate across from, being opposite: a neighbour can leave vis-à-vis, and that means he leaves in front of your house.