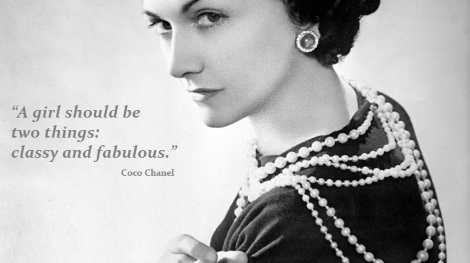 Read the best quotes about glamour, elegance, fashion… by the most famous fashion designers and learn how to pronounce correctly their names

Best quotes by Azzedine Alaïa
“I make clothes, women make fashion.”
“It's important to make women feel confident, because I think they are more important than men.”
The Tunisian-born French couturier and shoe designer was named Chevalier de la Légion d'honneur by the French government in 2008. Michelle Obama is one of his regular clients. Learn how to pronounce Azzedine Alaïa

Best quotes by Giorgio Armani
“Elegance is not catching somebody's eyes, it's staying in somebody's memory.”
“Remain true to yourself.”
The worldly known fashion designer was supposed to become a doctor but, luckily, he dropped out and found a job as a window dresser at a department store in Milan. After years of experience, he started designing menswear as a freelance, until he started his own business. Learn how to pronounce Giorgio Armani

Best quotes by Cristóbal Balenciaga
“A woman has no need to be perfect or even beautiful to wear my dresses. The dress will do all that for her.
“Elegance is elimination.”
Cristóbal Balenciaga was a Spanish Basque fashion designer and that’s why we pronounce his name in Spanish. Still Balenciaga, the fashion house he founded in 1914, is usually pronounced in French because the company has its headquarters in Paris and it is now owned by a French corporation. Learn how to pronounce Cristóbal Balenciaga

Best quotes by Pierre Cardin
“We undress men and women, we don't dress them anymore.”
“My name is more important than myself.”
The famous French fashion designer is actually Italian and he was born Pietro Cardin; he just grew up in France where he still lives. Learn how to pronounce Pierre Cardin

Best quotes by Coco Chanel
“A woman who doesn't wear perfume has no future.”
“A girl should be two things: classy and fabulous.”
The real name of the unforgettable icon of style was Gabrielle Bonheur Chanel. She became Coco after performing in a musical a song called ‘Qui qu’a vu Coco’. She was born in August and she was a Leo, that's why she collected anything related to lions. Lhearn ow to pronounce Coco Chanel

Best quotes by Hubert de Givenchy
"I absolutely believe my talent is God-given. I ask God for a lot, but I also thank him. I'm a very demanding believer."
“The dress must follow the body of a woman, not the body following the shape of the dress.”
Hubert de Givenchy was Audrey Hepburn’s favorite fashion designer. Nevertheless Lauren Bacall, Marlene Dietrich, Grace Kelly… they all appreciated the French aristocrat and his creations. Learn how to pronounce Hubert de Givenchy

Best quotes by Christian Dior
“Happiness is the secret to all beauty. There is no beauty without happiness.”
“A woman's perfume tells more about her than her handwriting.”
The most famous fashion designer in the world severely disappointed his parents: they wanted him to become a diplomat. He didn't listen to them and when he was still very young he opened an art gallery with his close friend Pablo Picasso, he then became the great fashion designer we all know. How to pronounce Christian Dior

Best quotes by Salvatore Ferragamo
“Elegance and comfort are not incompatible, and whoever maintains the contrary simply doesn't know what he's talking about”
“There is no limit to beauty, no saturation point in design, no end to the material...”
The great Italian shoemaker was the eleventh of 14 children. He was only 16 when he emigrated to Boston where one of his brothers worked in a cowboy boot factory. He then moved to California where he opened a shop for repair and made-to-measure shoes. That's how the most refined shoes in the world were born. How to pronounce Salvatore Ferragamo

Best quotes by Tommy Hilfiger
“I'm a designer of more than clothes. I am a designer of a very creative concept.”
“My passion for music has always inspired my designs.”
The American fashion designer really loves music. That’s why he sponsored concert tours by The Rolling Stones, Jewel, Britney Spears... How to pronounce Tommy Hilfiger

Best quotes by Marc Jacobs
“I always find beauty in things that are odd and imperfect - they are much more interesting.”
“Let's do what we love and do a lot of it.”
Marc Jacobs adores tattoos: almost 30 ones decorate his whole body. And they are also kind of bizarre: the Simpsons cartoon, M&M’s characters, Sponge Bob Square Pants… he also has a tattoo dedicated to his dog Daisy. Learn how to pronounce Marc Jacobs

Best quotes by Calvin Klein
“There has been a change in men's attitudes toward their clothes. Men are more aware of fashion; they're not afraid of it.”
“The best thing is to look natural, but it takes makeup to look natural.”
The American fashion designer of "youthful, understated coats and dresses" had singer Justin Bieber shooting for an underwear campaign. Learn how to pronounce Calvin Klein

Best quotes by Michael Kors
“Clothes are like a good meal, a good movie, great pieces of music.”
“I know what women look good in. I don't think the rules ever change.”
The famous American fashion designer started very early: he designed his first dress at the age of 5. It was his mother’s wedding dress; she was getting married for the second time. At the age of 11 he opened his own “boutique” in his basement selling handmade bags and copper bracelets. Learn how to pronounce Michael Kors

Best quotes by Karl Lagerfeld
“Don't dress to kill, dress to survive.”
“Beauty is also submitted to the taste of time.”
As incredible as it may sound, the German fashion designer doesn’t use a mobile phone, he prefers to send fax letters. On the other hand, he owns more than 100 iPods, all kept in a Louis Vuitton bag. He also loves books: he owns more than 300,000 books and has produced a fragrance for book lovers called Paper Passion. Learn how to pronounce Karl Lagerfeld

Best quotes by Guy Laroche
"My intention is to try and adapt haute couture to the current requirements: make simple dresses and chic. "
“I wanted to be different. I came to New York.”
The legendary French fashion designer never had a formal training in fashion design but still succeded in the business. He is mostly known for the creation of his fragrances: the most famous were Fidji and Drakkar. Learn how to pronounce Guy Laroche

Best quotes by Ralph Lauren
“I don't like it when a woman looks like a fashion victim.”
“I don't design clothes, I design dreams.”
This talented fashion designer never studied fashion, he graduated in Business and still he is one of the top designers in the world. Not even a terrible brain tumor in 1987 slowed him down. Learn how to pronounce Ralph Lauren

Best quotes by Christian Louboutin
“A woman carries her clothes. But the shoe carries the woman.”
“Shoes transform your body language and attitude. They lift you physically and emotionally.”
He is the most famous French footwear designer in the world, but when he was young he was a terrible student: he was expelled from school three times and he was only 12 when he ran away from home. He felt an outsider in his family and he wrongly believed he was adopted. Learn how to pronounce Christian Louboutin

Best quotes by Issey Miyake
“I was always interested in making clothing that is worn by people in the real world.”
“Well, what I'm doing is really clothing. I'm not doing sculpture.”
The Japanese fashion designer studied graphic design and you can tell from his creations. He designed and produced the black turtlenecks worn by Steve Jobs, one of his best friends. Once Steve Jobs explained: "I asked Issey to make me some of his black turtlenecks that I liked, and he made me like a hundred of them." Learn how to pronounce Issey Miyake

Best quotes by Franco Moschino
“Good taste doesn't exist. It is our taste. We have to be proud of it.”
“I don't say I create. I copy, of course. I've never been interested in the point of view of the tailor or creator. Fashion is a visual impression. This is why I often refuse the name of fashion designer. It's a superficial, stupid job. The social-psychological aspect is more interesting.”
One of the most mispronounced names in fashion dreamed to be a painter and he started to work in fashion only to pay for his Arts studies. That’s how he became one of the most famous Italian designers in the world. Learn how to pronounce Franco Moschino

Best quotes by Miuccia Prada
"Women always try to tame themselves as they get older, but the ones who look best are often a bit wilder."
"I don't believe in people who think that clothes are not important."
Miuccia Prada, the globally known fashion designer behind the brands Prada and Miu Miu, is the pseudonym of one of the commonest names in Italy: Maria Bianchi (translated in English: Mary Whites). Prada was her mother’s surname. According to Forbes, she is the richest woman in Italy. Learn how to pronounce Miuccia Prada

Best quotes by Yves Saint-Laurent
“The most beautiful clothes that can dress a woman are the arms of the man she loves. But for those who haven't had the fortune of finding this happiness, I am there.”
"Fashions fade, style is eternal."
The most celebrated fashion designer in the world felt intimidated by Christian Dior, who introduced him to the fashion industry, and taught him the basis of his art. How to pronounce Yves Saint-Laurent

Best quotes by Valentino
"I am especially grateful that I have been able to keep my own style over the decades."
"I know what women want. They want to be beautiful."
Valentino, whose complete name is Valentino Clemente Ludovico Garavani is one of the most famous fashion designers of all time. Valentino created a particular bright shade of red which is now called “red Valentino” and used only for his dresses. He adores dogs and he owns six pugs: Molly, the mother, and Milton, Monty, Margot, Maude and Maggie, her puppies. Learn how to pronounce Valentino

Best quotes by Gianni Versace
"I like the body. I like to design everything to do with the body."
"I really want to make clothes that are feminine and help women look beautiful."
The Italian designer, murdered in Miami in 1997, designed stage costumes for pop stars including Elton John and Madonna, his creations have been displayed in many international museums. Learn how to pronounce Gianni Versace

Best quotes by Louis Vuitton
It is the most luxurious brand in the world. Be very careful where you buy a bag or a suitcase: 99% of Louis Vuitton merchandise in the world is fake. As crazy as it may sound, at the end of every single year, they burn all their unsold bags... just to maintain the exclusivity of their brand. How to pronounce Louis Vuitton