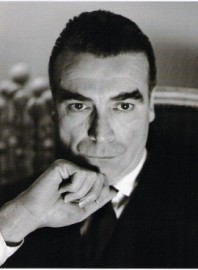 Cristóbal Balenciaga was a Spanish fashion designer and is widely considered one of the greatest ever fashion designers and was considered as such by fellow designers Coco Chanel and Christian Dior, and taught other great fashion designers such as Hubert de Givenchy, Oscar de la Renta. In particular, he was known for his extraordinary craftsmanship as a highly trained tailor. He was known for his structural designs that were akin to sculptures.
Balenciaga founded the fashion house that was named after him in 1917. As a result of the Spanish Civil War, he moved to Paris where he was deemed the "King of Fashion".
After Balenciaga died, the company he had founded was sold to multinational French fashion conglomerate Kering.
The correct pronunciation of Cristóbal Balenciaga is Crees-TOH-bahl Bah-lehn-THEE-ah-gah.
The stress in Cristóbal is on the second syllable. The "i" in the first syllable is pronounced with an "ee" sound and the "a" in the last syllable is pronounced like an open "ah" sound.
The "b" in Balenciaga is pronounced like the "b" in "about", but without entirely closing the lips. The result is that the pronunciation of the "b" nearly sounds like a "v". The "a"s in Balenciaga are all pronounced as a short "a" or "ah" sound. The stress is then pronounced on the third syllable. The "c" in the third syllable is pronounced with an English "th" sound and it is followed by an "i" that is pronounced as an "ee".READ MORE
Fashion quotes by the most famous fashion designers worldwide and the pronunciation of their names