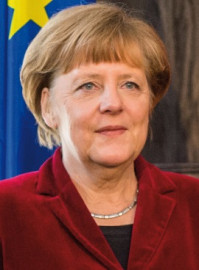 Angela Merkel is the Chancellor of Germany and has been since 2005. She is the former leader of the Christian Democratic Party (CDU), after announcing she would not stand for reelection in 2018 and that she will also not stand for reelection as chancellor in 2021. She is regarded as holding considerable power in the European Union and is represented as the de facto leader of the union.
Prior to becoming a politician, Angela Merkel was a research scientist, with a PhD in quantum Chemistry.
The correct pronunciation of Angela Merkel in German is Ahn-ghe-lah Mehr-kle.
The "e" -Mehr is pronounced like the "e" in the word merry, while the -kle is pronounced like in the name "Markle", as in Meghan Markle's name.