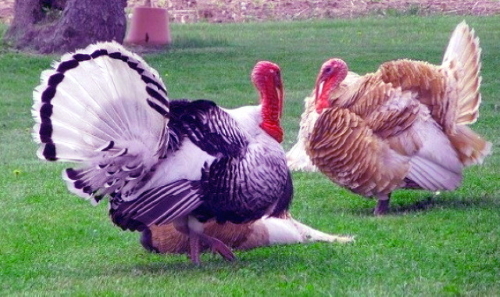 It's time to celebrate Thanksgiving! Read why we observe this festivity, how it all started, why we eat turkey and listen to the correct pronunciation of all the words you need to celebrate accordingly.

How did Thanksgiving start?

The legend says it all began with the Pilgrim Fathers, the early settlers, who left England to reach the New World.
In 1620, 102 pilgrims boarded the famous Mayflower boat and touched land after two months of hard navigation, during which so many of them died.
Once arrived in the new continent, the early settlers planted the seeds they had brought with them with great care, but the winter was severe and allowed only a poor harvest.
The harvest was not enough for this new community, and only half of the pilgrims survived during the first year. The harvest would have been unsuccessful also the following year if the Native Americans had not helped the newcomers: they helped the pilgrims to select the best land and to decide where to sow and when.

Who are we thanking on Thanksgiving?

The year after, the harvest was so generous at last to satisfy the needs of the whole community. William Bradford, the governor of Plymouth, in Massachusetts (the new colony founded by the Pilgrims), ordered a gathering to celebrate and thank God for his blessings... luckily, the Native Americans, the real benefactors, were invited to the celebration.
During the celebration of Thanksgiving, a delicious meal was prepared for all the guests: roasted turkey, corn, and pumpkin pies... the same dishes that you can enjoy nowadays during this celebration.

Why do we eat turkey on Thanksgiving?

Among the various holidays (turkeys are also eaten at Christmas), some 210 million turkeys are sold annually in the US alone. Too bad that, this year, this type of meat will cost a lot more.
As early as January 2022, turkeys in North America have seen a price increase of 20 to 25 percent and continue to rise due to a bird flu epidemic and general inflation, causing a decrease in buying power for everyone.