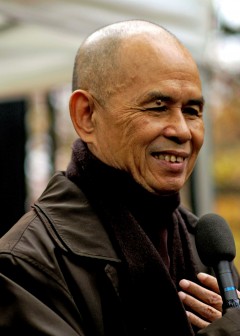 Thích Nhất Hạnh is a Vietnamese Zen Buddhist monk, poet, writer, and peace activist, born as Nguyễn Xuân Bả. Thích Nhất Hạnh has published over a hundred books and amongst his most known works are Being Peace, The Miracle of Mindfulness, and Reconciliation - Healing the Inner Child.
The correct pronunciation of Thích Nhất Hạnh is Teek Nyaht Hahn.
Because Vietnamese is a tonal language this phonetic transcription of the pronunciation of his name is the English version.
His first name, Thích is pronounced as Teek, with a long "e", which means it is pronounced with an "ee" sound.
His second name, Nhất, is pronounced with an "ny" sound that is similar to the "ñ" in "piñata", which is followed by pronouncing an open "ah" sound.
His last name, Hạnh, is pronounced once again with an open "ah" sound.