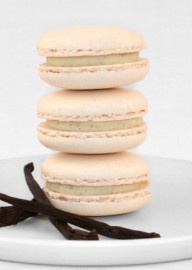 The macaron is a French sweet made from two meringue disks with a butter-based flavored cream in the middle.
Modern versions of French macarons were developed in the 1800s but were originally made with almond flour. It is said that macarons originally derived from Italy, with its name coming from the type of pasta, maccheroni.
The macaron is traditionally viewed as having been brought to France by Catherine de' Medici in 1533 and since then developed to become more similar to the French macarons we see today.
The macaron confection must not be confused, nor pronounced like the macaroon, which is an entirely different food product. The macaroon is a cookie developed in the UK that is made from ground almonds and can also contain coconut. Sometimes, the macaron is known as the French macaroon.
In French, the correct pronunciation of macaron is mah-kah-rohn.
The vowels in macaron are pronounced as short vowels, so the "a" is pronounced as "ah" and the "o" as an "oh". The "ah", however, is pronounced in a more open manner compared to how you would usually pronounce it in English. Additionally, the "r" is pronounced as a guttural "r" and the "n" is pronounced as a nasal "n".