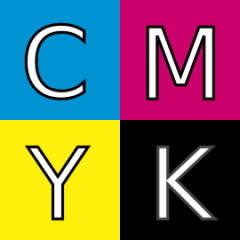 The color Key Black is one of the four ink plates in the subtractive color system known as CMYK, where the "K" represents Key Black. The other three colors in this system are along with Cyan, Yellow and Magenta. These four colors are the ones used in color printing.
According to some, black ink is called Key because the four colours are aligned with the key of the black key plate, the plate that contains the most details to be printed. According to others, the K comes from the last letter in black and was chosen because B already means blue: but blue is not considered a primary color, but cyan which is a greenish-blue is.
The correct pronunciation of Key Black in English is Kee Blak.