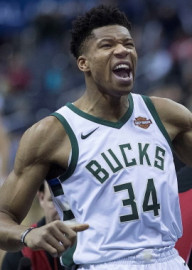 Giannis Antetokounmpo is a Greek professional basketball player of Nigerian descent, born Giannīs Sina Ougko Antetokounmpo. He is currently playing for the Milwaukee Bucks in the NBA.
There are numerous ways to pronounce Giannis Antetokounmpo's name because of his varied origins. His first name, Giannis, is a typical Greek name that is pronounced as YAHN-nees, with emphasis on the "n"s, which acquire an elongated sound.
His last name is Nigerian, so the "t"s in his name should be pronounced as "d"s. This would make the pronunciation of Antetokounmpo AH-ded-KOOM-poh. This version also elides the third syllable and both the "n"s are silent. The other way to say Antetokounmpo is in Greek, where it would be pronounced as AHN-teh-toh-KOOM-poh. As you can see, each syllable is more clearly pronounced and it acquires a more phonetically linear pronunciation. The Greek version, which is enunciated in the audio pronunciation, is the more frequently used version around the NBA,
Giannis Antetokounmpo himself has stated that he pronounces his last name in both versions and switches between them, without indicating a specific preference.