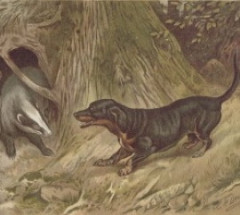 The dachshund is a German breed of dog with short legs and a long body that is commonly known as the sausage or wiener dog.
The word dachshund derives from the term dachs, which means "badger" in German and hund, which means "dog". The reason the breed is called dachshund is because of its scent and ability to flush out burrowing animals such as badgers.
The pronunciation of dachshund seems complicated because of the apparent difficulty of pronouncing the -ch and -sh sounds because they appear as sequential. From the way the word is constructed, the -sh contains the end of Dachs and the beginning of Hund.
To pronounce dachshund correctly it is easier to split the two German words.
First of all, the pronunciation of dachs is dax. The "chs" in dachs is simply pronounced how you pronounce an "x".
Second, the pronunciation of hund is hoond. So, in this case, the "u" is pronounced like a double "o".
If you add the two words together the correct pronunciation of dachshund is dax-hoond.