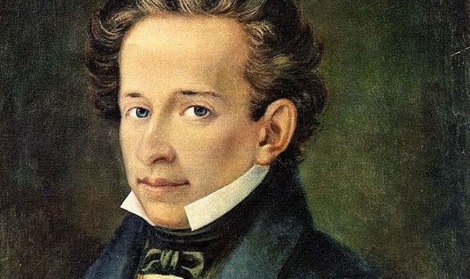 Giovanni Boccaccio was born in 1313 in Tuscany (Central Italy) and he was a writer, a scholar, and a poet. He is the author of Decameron (or Decamerone), a book composed of 100 novellas. Each novella is told by one of the seven young boys and three girls living in an isolated villa near Florence, while trying to escape the terrible plague spreading in the city.

BESIDE a fountain in a little grove
That fresh green fronds and pretty flowers did grace,
Three maidens sat and talked methinks of love.
Mid golden locks, o'ershadowing each sweet face,
For coolness was entwined a leaf-green spray,
And all the while a gentle zephyr played
Through green and golden in a tender way,
Weaving a web of sunshine and of shade.
After a while, unto the other two
One spoke, and I could hear her words: "Think you
That if our lovers were to happen by
We would all run away for very fright?"
The others answered her: "From such delight
She were a little fool who'd wish to fly!"

Giosuè Alessandro Giuseppe Carducci was an Italian poet, the first to receive the 1906 Nobel Prize in Literature.

He was born in Tuscany, in the province of Lucca, and after his degree in philosophy and philology, he started teaching. He was a passionate literary critic and an atheist rather critic against the Catholic church.
Poem by Giosuè Carducci: San Martino (Saint Martin)

The fog to the steep hills
amid the rain ascends,
and under the mistral
the sea screams and whitens:
but through the alleys of the village
from the bubbling vats
goes the sour smell of wine
the souls to rejoyce.
Turns on burning logs
the spit, sputtering;
stands the hunter whistling
on the door to gaze
among the reddish clouds
flocks of black birds
as exiled thoughts,
in the twilight migrating.

Gabriele D'Annunzio was born in 1863 and he became a writer, a poet, a journalist, and even a passionate soldier during World War I. He was awarded the title of Prince of Montenevoso by the king Vittorio Emanuele III, a noble title created especially for him.

D’Annunzio participated very actively to the Italian political life during the fascist period.
This is one of his poems La pioggia nel pineto (The Rain in the Pinewood)

On the junipers
Thick with fragrant berries.
Rain falls on our sylvan
faces,
It rains on our bare
Hands,
On our light
Clothes,
On the fresh thoughts
That our soul uncovers
New,
On the beautiful fairytale
That yesterday enchanted you,
That today enchants me,
O Hermione…

He was born in 1798 in Recanati, a small town in the Marche region, in Central Italy. He is considered one of the most important poets in the world and also a philosopher at the same level of Schopenhauer, Kierkegaard, Nietzsche and even Kafka.

It was always dear to me, this solitary hill,
and this hedgerow here, that closes off my view,
from so much of the ultimate horizon.
But sitting here, and watching here,
in thought, I create interminable spaces,
greater than human silences, and deepest
quiet, where the heart barely fails to terrify.
When I hear the wind, blowing among these leaves,
I go on to compare that infinite silence
with this voice, and I remember the eternal
and the dead seasons, and the living present,
and its sound, so that in this immensity
my thoughts are drowned, and shipwreck
seems sweet to me in this sea.

He was born in 1785 and he is so important to Italian literature because he significantly contributed to the create the Italian language. He is also a very valued poet.
This is a part of one of his poems: La Pentecoste (Whitsunday)

Mother of the sons of God,
Image of the house supernal,
Conservator of the Blood
Ever changeless and eternal,
Thou who while the ages wear
Spread'st thy tents unfailingly,
Battling, suffering, voiced with prayer,
Here and to the farthest sea,

Camp of those whose hope is might,
Church of Him who is eternal,
Where wast thou? -- what pit or height
Hid thee at thy birth supernal,
When thy King, by traitor-bands
Doomed to die on calvary,
Purpled o'er those hallowed sands --
Altar for eternity?

When the sacred Body, come
From sepulchral darkness free,
Mighty, from the breathless tomb,
Breathed a new vitality;
And when in His hand He brought
Price of pardon, paid alone,
From this earthy world of naught
Rising to His Father's throne…

Eugenio Montale was born in 1896 and was awarded with the Nobel Prize in Literature in 1975.  He was a poet, a writer, a journalist, and a translator. He was antifascist and his first poetry collection Ossi di seppia (Cuttlefish Bones), which appeared in 1925, reveals his detachment from the Italian political situation of that time and his refuging in the peace of nature.
This is one of the poems collected in Cuttlefish Bones: Portami il girasole ch’io lo trapianti (Bring Me The Sunflower)

Bring me the sunflower so I can transplant it
to my earth scorched with salt,
so it can display all day to the azure mirrors
of sky the anxiety of its yellow face.
Dark things stretch towards brightness,
bodies exhaust themselves in a flow
of colours: this in music. To vanish
is thus the hazard of venturing.
Bring me the plant that leads
where blond transparencies rise
where life dissolves like essence;
bring me the sunflower crazy with light.

Giovanni Pascoli, born Giovanni Placido Agostino Pascoli was an Italian poet and classical scholar. He was born in a village, in Emilia-Romagna (Northern Italy), once called San Mauro di Romagna. In his honour, the name was changed to San Mauro Pascoli.
Poem by Giovanni Pascoli: Nella nebbia (In the fog)

And I looked down at the land below.
Gone, all of it, drowned. Poured into a long,
flat, sweep of gray, a sea without waves or shore.

And piercing the air though just barely there,
the strange sound of small fierce cries: birds,
floundering, scared, in that groundless world.

And high in the sky, the bones of the beech trees
bobbed their lean skeleton selves. And beside them
the dreams of ruins, and of hermits' retreats.

And a dog barked and barked, but from where
wasn't clear, maybe next to the footsteps I thought
I could hear, steps neither far nor near;

echo of steps, neither spry nor slow, endless
and forward and back. I looked below: nothing,
though, and no one, that you, my eyes, could see.

The dreams of the ruins wondered: will he
not come or be gone? The skeleton branches
wondered: And you, who continue on?

And maybe I saw a shadow, a straying shade
with a weight on its back. In an instant I saw
and did not see, and the instant remained only one.

To my ear all that came was the stir of the birds,
bewildered and unmoored birds. And the bark of the dog
in the sea without shore, and the steps neither near nor far.

The Sicilian novelist and poet Salvatore Quasimodo was born in 1901 and was awarded the 1959 Nobel Prize for Literature. The reason he was awarded was "… for his lyrical poetry, which with classical fire expresses the tragic experience of life in our own times.”
Poem by Salvatore Quasimodo: E se di me gioia ti vince (Motion of Stars And Stillness)

And if through me joy conquers you
it will be a knot of stars.
No other hour consoles us
but that of silence; and the mutable
face of air and hills fails to satisfy,
the light rotates its hollow skies
at the edge of darkness.
Motion and stillness of the stars
hurls night at us in swift deceit:
stones that the water bared at every mouth.
Children are still asleep in your sleep.
I even hear a cry now and then
break off and become flesh;
and a clapping of hands and a voice
opening me to unknown sweetness.

​Umberto Saba
Umberto Poli, the real name of ​Umberto Saba, was born in 1883 in Trieste when it still was one of the largest cities of the Austro-Hungarian Empire. His father abandoned his mother when she was just one month pregnant. The young Umberto grew up sad and always missing a father’s love. As an adult, he suffered of depression. He wasn’t even good at school, but he started composing poetry, becoming one of the most important poets in Italy.Poem by Umberto Saba: Io sono come quella foglia, guarda (The leaf)

I am like that leaf, look,
on the bare branch, to which wonder
still attaches.
Ignore me then. Don’t be saddened
by my great age that fills you with anxiety,
and lingers here in childish outbursts.
Wish me farewell, though there’s no need to say it.
Dying is nothing; it’s losing you is hard.

Giuseppe Ungaretti, the Italian poet, writer, journalist, and literary critic, was born in 1888, in Egypt, into an Italian family. He was a representative of a new poetic movement called Hermeticism, which introduced a form of poetry deliberately incomprehensible and too difficult to be understood.
Poem by Giuseppe Ungaretti: Sono una creatura (I Am A Creature)

as cold
as hard
as thoroughly dried

as refractory
as deprived of spirit

Like this stone
is my weeping that can't
be seen