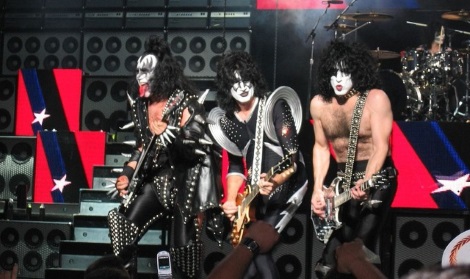 Interesting facts about the most famous musical groups, their names and the correct pronunciation

Red Hot Chili Peppers
The original name of the American band Red Hot Chili Peppers was not so cool at the beginning: Tony Flow and the Majestic Masters of Mayhem. After the first successful performances, the band decided to change the name to something easier to remember.

R.E.M.
The American rock band chose the acronym of Rapid Eye Movement, the deep stage of sleep. The reason of this choice? Michael Stipe, the lead singer, chose at random from a dictionary.

Black Sabbath
Tony Iommi, guitarist and founder of the heavy metal band Black Sabbath, lost the tips of two fingers on his right hand working in a sheet metal factory, when he was young. At first he thought he lost the possibility to play guitar forever, but afterwards, inspired by Django Reinhardt, a jazz guitarist playing wit two paralyzed fingers, he created two covers made of plastic and leather for his fingers and started to play again.

Rush
Geddy Lee, the Canadian musician and songwriter, lead vocalist for the Canadian rock band Rush, was born Gary Lee Weinrib. His mother, a Polish woman with a strong accent, wasn’t able to correctly pronounce his name, Gary. When his friends heard Lee’s mother calling him “Geddy”, the name became his nickname.

Jethro Tull
The British band was named after an English agriculturist, Jethro Michael Tull (1674-1741), who invented the seed drill, an automatic system of seeding.

System of a Down
The band is formed by four Armenian-Americans: Serj Tankian (lead singer), Daron Malakian (singer and guitar), Shavo Odadjian (bass) and John Dolmayan (drums). If you hear of a surname ending in ian or yan, that name is Armenian.

Pearl Jam
The band name, as the lead singer Eddie Vedder explained, has been inspired by the way pearls are created. "The name is in reference to the pearl itself ... and the natural process from which a pearl comes from. Basically, taking excrement or waste and turning it into something beautiful."

Depeche Mode
The band is named after a French fashion magazine, Dépêche mode… just because they liked the sound of it.  French dépêche means dispatch while mode is the French translation of fashion.

Lynyrd Skynyrd
The American rock band got the name from Leonard Skinner, a high school teacher who hated students with long hair and he usually suspended them.

AC/DC
Malcolm Young, Scottish-born Australian guitarist, when he was very young, used to work in a bra factory as a sewing-machine mechanic. It looks like, he saw AC/DC written on a sewing machine.