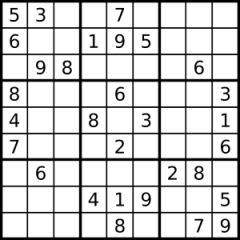 Sudoku is a Japanese logical puzzle where you must fill a 9x9 grid with single digit numbers without repeating the digits each column, row and the 9 3x3 subgrids that populate the central grid.
The correct pronunciation of the word sudoku in Japanese can be written as soo-duh-koo. The -duh contains a soft and short "u", similarly to that in the word "up". The final part, -koo contains a somewhat short "oo" sound.
The word sudoku is often mispronounced by English speakers as su-due-koo, most probably because the apparent "u" sound in the middle of the word is improperly stressed.