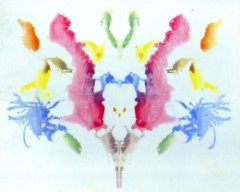 The Rorschach Test is a psychological test developed by Swiss psychiatrist and psychoanalyst Hermann Rorschach. The Rorschach Test is also known as the inkblot test because tables of different inkblots are used, where the subject describes his perception is recorded and interpreted in order to reveal thought processes and personality traits.
The correct pronunciation of Rorschach in German is Rohr-shah(k).
The first part, transcribed as -rohr is pronounced with an open "oh" sound. The second syllable is slightly more complicated. The final -ah(k) sound begins with an open "ah" sound, however, it is concluded with a "rolled h" sound, represented by the "(k)". What this means is that you must pronounce a sort of "spitting h" if you will, similar to the "ch" in the word Loch and is common in several other words in languages like Gaelic or Hebrew.