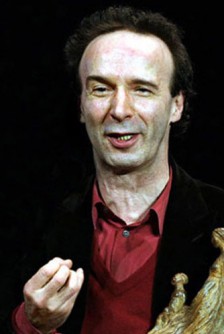 Roberto Benigni is an Italian film director, actor and screenwriter. He directed the film Life is Beautiful (La vita è bella) and he won an Oscar for Best Actor for starring in it and an Oscar for Best Foreign Language Film. Roberto Benigni is considered one of the greatest Italian actors and without doubt the most internationally influential Italian actor who is currently alive.
Outside of his filmmaking activities, Benigni holds numerous honorary degrees. Many of these are connected to his much celebrated one man show TuttoDante, where he recites, comments and explains Dante Alighieri's Divine Comedy in connection to current events. Through his work on Dante, Benigni managed to expand awareness and knowledge of the Divine Comedy to English speakers around the world in a more accessible and entertaining manner.
The correct pronunciation of Roberto Benigni in Italian can be phonetically transcribed as Roh-behr-toh Beh-knee-ñee. To achieve a proper pronunciation of his first name, Roberto, it is important to pronounce the "o"s with a closed sound, like in the word "more". The "e" in -behr must also be pronounced with a closed sound like in the word "set". His last name, Benigini, begins with another closed "e", like in "set". The final challenge in pronouncing Benigni is the much dreaded "gn" sound. We have chosen to transcribe it, as "ñ" as it is equivalent to the "gn" sound in Italian and because it will be familiar to English-speakers, as it is used in common foreign words like "piñata" or "niño".