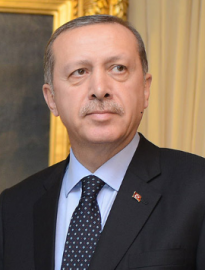 Recep Tayyip Erdoğan is a Turkish politician who is the 12th President of Turkey and is the former Prime Minister of Turkey. He is a conservative politician who is the leader of the Justice and Development Party (AKP). He has been often accused of trying to undermine Turkish democracy, of State censorship and of corruption.
The correct pronunciation of Recep Tayyip Erdoğan in Turkish can be phonetically transcribed as Reh-jep Tah-yeep Err-doh-han, as heard in the audio file. The most important element in pronouncing Erdoğan correctly is to remember that the letter "ğ" must be pronounced as an "h". Another important fact is that the beginnning of his last name is pronounced like the verb "to err".
Regarding his first name, it is important to note that the "c" in Recep is pronounced like a "g".