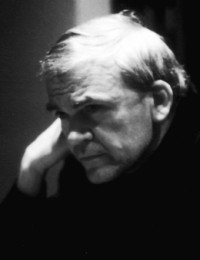 Milan Kundera is a Czech writer, poet and essayist. While he was born in the former Czechoslovakia, he was exiled to France in 1975 and since then acquired French citizenship, after having his Czech citizenship revoked in 1979. In fact, he considers himself a French writer and his work a part of the wider body of French literature. His Czech citizenship was finally restored in 2019.
Kundera's major works included The Book of Laughter and Forgetting and The Unbearable Lightness of Being, which is his most celebrated and important work.
Even if Kundera is now a French citizen and considers himself as French, his name is Czech and therefore is pronounced in Czech. So, the correct pronunciation of the name Milan Kundera is MEE-lahn KOON-deh-rah. In his first name, Milan, the stress is on the first syllable -MEE, where the "i" is pronounced with a long "e", which makes an "ee" sound, like the word "see". His last name, Kundera, also has the stress on the first syllable, "Kun", which is pronounced as -KOON, with the "u" pronounced with an "oo" sound. The final two syllables in Kundera, the "e" and the "a" are pronounced in an open way, producing an "eh" and "ah" sound respectively.