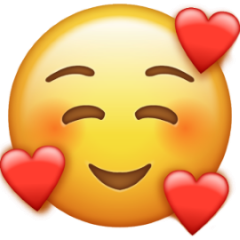 Emojis are smiley faces and ideograms typically used in messaging and social media. Emojis evolved from emoticons, which were composed by using characters such as parentheses and punctuation marks.
The emoji originates in Japan around 1997. In Japanese, the word emoji originally means "pictograph", and literally translates to "picture character". Emoji does not therefore derive from the word "emoticon" in English, but they developed independently and coincidentally ended up having a similar sound.