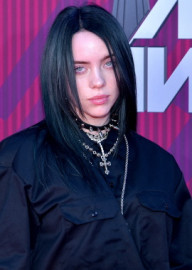 Billie Eilish is an American multi-Grammy Award winning singer and songwriter.
The artist’s full name is Billie Eilish Pirate Baird O'Connell and she is of both Scottish and Irish descent, as clear from her last name. Eilish was meant to be her first name, but Billie was chosen instead.
Her stage name, Billie Eilish, which is composed of her first name and the first of her middle names is pronounced Billie (as it is read) and Eye-lish. As she describes it, it is pronounced “like eyelash with a lish”.