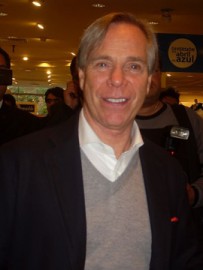 Tommy Hilfiger is an American fashion designer of Dutch-German descent. He is the founder of the eponymous company and brand, Tommy Hilfiger Corporation.
He started his career opening a clothing store with some friends in the 1970s and began designing his own menswear line in the 1980s. He primarily designed jeans and menswear, but once his company solidified, after having been founded in 1985, he expanded to women's clothing, accessories, footwear, perfume and luxury items. The company went public in 1992 and is now owned by PVH Corp. (Phillips-Van Heusen), an American clothing company that also owns Calvin Klein.
The correct way to pronounce Tommy Hilfiger is in English because his parents and ancestors have long been living in the United States, so the pronunciation of his name has been adapted to American English. The correct pronunciation of Tommy Hilfiger can therefore be transcribed as Tom-ee Hill-fig-ur.READ MORE
Fashion quotes by the most famous fashion designers worldwide and the pronunciation of their names