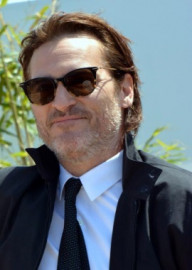 Joaquin Phoenix is a Puerto Rican-born American actor, producer and musician. His full name is Joaquín Rafael Bottom. He played Commodus in Gladiator and starred in Two Lovers, In The Yards, and Walk the Line. He also starred as Joker in the eponymous film directed by Todd Phillips​ in 2019, for which he won an Academy Award for Best Actor in 2020. Phoenix has also been the recepient of numerous other awards, including a Grammy and two Golden Globes.
The correct pronunciation of Joaquin Phoenix's name is Hoh-ah-keen Fee-Nix. His first name is Spanish, therefore the "J" is pronounced with an "H" sound. The "quin" in his name is pronounced like the word "keen" and must be stressed given that there is an accent "i", which corresponds to the "ee" sound. His last name, fortunately, is easier to pronounce, and is pronounced like the city of Phoenix.