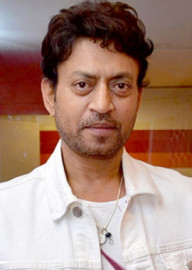 Irrfan Khan was an Indian actor and was considered one of the greatest contemporary Indian actors. Khan's birth name was Sahabzade Irrfan Ali Khan, but he is often simply credited as Irrfan. Irrfan Khan was a very prolific actor who starred in numerous Hindi films but also had great success in British cinema and in Hollywood movies.
Khan died at the young age of 53 after a two-year battle with neuroendocrine cancer.
In Anglo-American cinema, he is best known for his roles in Slumdog Millionaire (2008), Ang Lee's Life of Pi (2012), The Lunchbox (2013).
The correct pronunciation of Irrfan Khan is er-FAHN kahn.
The "i" in the first syllable of Irrfan is pronounced midway between an "e" and and "i" sound. The following "r" is pronounced like a slightly trilled "r". In Irrfan, the stress is then pronounced on the second syllable, -FAHN. The "a" in Irrfan is pronounced as an open "ah" sound.
His last name, Khan, is pronounced as it is read, with the "a" that is pronounced as a short "a" or "ah" sound.