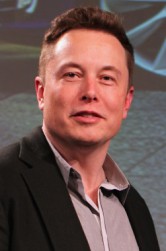 Elon Musk is a South African-born Canadian American engineer, entrepreneur, inventor and investor, whose full name is Elon Reeve Musk. He is the founder and C.E.O. of Tesla and SpaceX and one of the co-founders of PayPal. Thanks to his technological endeavours, Elon Musk is a multi-billionaire and is one of the richest people in the world.
The correct pronunciation of Elon Musk is EE-lohn Musk.
The "E" at the beginning of his name is pronounced like the letter "E". The stress is also placed on the first syllable.
On May 4, 2020, Elon Musk had a son with the musician, Grimes, whom he named X Æ A-12 Musk. Musk has yet to disclose exactly how X Æ A-12 is pronounced. However, he has explained that the first two parts of his name, "X" and "Æ" are pronounced as Ex and Ash. It is still unclear whether A-12, which is the name of his favorite aircraft, is pronounced as A-twelve or Archangel (pronounced as Ark-angel).
So, Elon Musk's son's name, X Æ A-12, is either pronounced as Ex Ash A-twelve or Ex Ash Ark-angel.