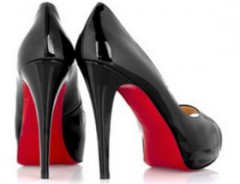 Christian Louboutin is a French footwear designer who is the founder of the brand of the same name. His stiletto shoes are easily recognizable by their red-lacquered soles.
The correct way to pronounce Louboutin in French often eludes English speakers even if the pronunciation isn't all that difficult. You'll often hear pronunciations along the lines of La-boo-ten or Low-boo-tahn, which are both wrong.
The correct pronunciation of Christian Louboutin in French can be phonetically written as Creest-yawn Loo-boo-tohn. The name Christian presents two difficulties of pronunciation. The first one is the gargled "R" that is hard to reproduce for non-native speakers. The second, and possibly more important one is the final "N", which is a nasal "N" that sounds much shorter than an "N" in the English language. The last name, Louboutin, is simple to pronounce in its first two syllables "Loo-boo", but is more complicated in the final part. The -tin part of Louboutin, transcribed as -tohn, sounds like an open "O" like the unit of measurement "ohm", with a short nasal "N" at the end.READ MORE
Fashion quotes by the most famous fashion designers worldwide and the pronunciation of their names